We’re less than a week away from the Farm to Food Truck Challenge II – the exciting event hosted by SoCo Farmers’ Market where six gourmet food trucks will compete for the title of ‘Top Chop Truck’ by creating delicious dishes using ingredients from the market.  And as promised, in these days leading up to the big event on Saturday 11/19, I’m giving you a behind-the-scenes look at each of the trucks to give you a flavor of what their specialties are.

Today we’re going inside the kitchen-on-wheels of the ‘Masters of Sustainable Seafood’ – the SlapFish Truck.  Open for just about five months now, SlapFish has exploded onto the gourmet food truck scene with their fresh take on mobile seafood, combining convenience with five-star quality. Fish-lovers, beware — you are about to visit paradise. 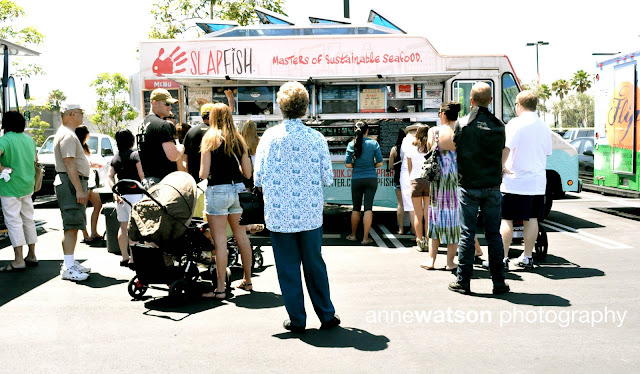 Now, I must admit — I’m the wife of an Englishman and up ’til now when I thought of ‘fish-on-the-go’, my mind immediately churned up images of heavily battered & fried, rolled-in-grease-stained-newspaper Fish ‘n’ Chips that never seem to really digest, but just sit in your stomach for days… if not months. That image is happily shattered now. (Thank you, SlapFish!)

Founded by owners Chef Andrew Gruel and Jethro Naude, the SlapFish philosophy is simple: “No more greasy, frightful and uninspired versions of convenient seafood. Instead get ready for fish so fresh you can slap it….and fast.” And, not only is the the SlapFish menu fresh & delicious, but it’s environmentally responsible too. Well, slap me silly – that sounds good to me!

I was lucky enough to spend an afternoon on board the SlapFish truck with Sous Chef, Jesse Runkle, and All-Around-Renaissance-Man (the title I’ve officially given him), Ruben Jaimes. These super-cool guys not only have two of the greatest smiles I’ve seen in a long time (I mean, who wouldn’t feel welcomed by these friendly, grinning faces?!), but they seriously know their stuff when it comes to preparing & serving-up delicious seafood to a hungry lunch crowd.  From perfectly-grilled fish tacos, to the ingenious crab & brie melt sandwich (yum!), to their signature ‘Lobsticle’ – they’ll make ya’ think you’ve died and gone to seafood heaven.

So check out this feast-through-photos showcasing the dishes that can be found these days in the kitchen of the SlapFish truck.  And then be sure to bring your appetite this Saturday, November 19th to SoCo Farmers’ Market as SlapFish goes head-to-head with the other five trucks in the Farm to Food Truck Challenge II!

Stay tuned for more details on the other competing trucks this week – next up, the Piaggio Gourmet on Wheels truck!…