Two weeks from today on Saturday, November 19th, SoCo Farmers’ Market in Costa Mesa will play host to the Farm to Food Truck Challenge II – the exciting event where 6 gourmet food trucks compete for the title of ‘Top Chop Truck’ by creating delicious dishes using ingredients from the farmers’ market.  And as promised, in these weeks leading up to the Challenge I’ll be giving you a behind-the-scenes look at each of the 6 trucks to give you a flavor of what their specialties are and what they’re all about!

Next up on the roster is the fabulous Home Skillet truck. Another relatively new-kid-on-the-block, Home Skillet has been open for business for exactly 3 months now.  And as their name implies, their mission is to serve home-styled, made-from-scratch food prepared only with the freshest, locally-sourced ingredients possible. They are a ‘mobile take on the modern American kitchen.’

I had the opportunity to spend a morning with the owners of Home Skillet – two of the nicest people I’ve ever met – Christie Morisoli and Vinnie Gagliano from Huntington Beach, California.  In Vinnie’s words, the Home Skillet truck is truly Christie’s baby.  While they have partnered together in owning and running this mobile operation, it’s Christie’s culinary background and passion for creating new dishes that are a big drive behind the truck’s menu and philosophy. And together with their friend and fellow cook, Eddie Salcedo, they produce some truly phenomenal, mouth-watering dishes out of their kitchen on wheels. 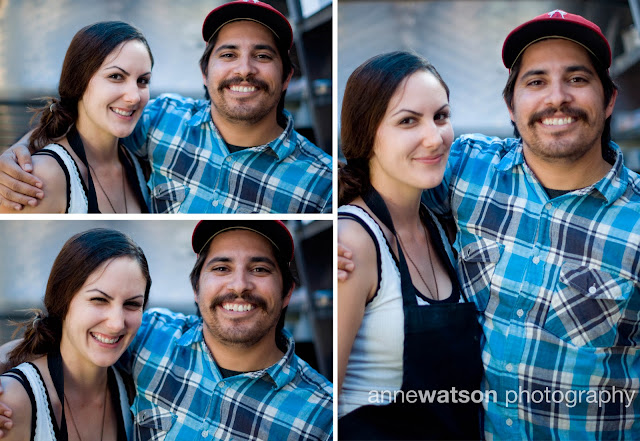 Everything served from the Home Skillet truck is made from scratch using the freshest produce and meats possible.  To do this, they’ve partnered with Mike Brano of Mama Mickey’s in Huntington Beach, a foods company that is dedicated to supplying local food that is grown sustainably and biodynamically – all from Southern California. So, when you eat at Home Skillet not only are you getting a taste of what’s in season & freshest at that moment, but you are also supporting local farmers – what could be better than that?!

And, although they’ve only been open for a few months, they already have a dedicated following and ever-growing fan base who crave their signature dishes such as the Pork Belly Reuben Slider with Home Skillet sauerkraut, russian dressing & swiss cheese and the Mini Lamb Burger with feta cheese, cucumber, tomato and red onion on an artisan ciabatta roll. Yum!

Below, feast your eyes on a taste of what can currently be found in the Fall kitchen of the Home Skillet truck.  And then be sure to bring your appetite on Saturday, November 19th to SoCo Farmers’ Market as Home Skillet goes head-to-head with the other 5 trucks in the Farm to Food Truck Challenge II!

Stay tuned for more details on the competing trucks in the coming days – next up, the Seabirds truck!…